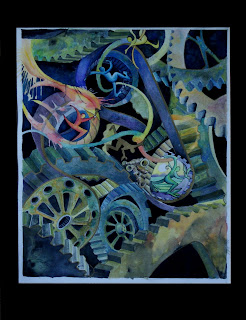 This water color piece is entitled... CRUCIBLE...
It was the child of frustration.
I was working on several projects that seemed to be going nowhere in a hurry.
Try as I may results were slow to non existent.
Eventually I "surrendered". I stepped away from pursuing these goals and began to sketch.
My frustration poured out of me onto the page (first draft was in pencil and will also be included in the up-coming show) and evolved into what you see.
Several interesting things happened along the way.
All of the little characters in the piece were originally the same but as I drafted and re-drafted the piece, each one took on a distinct persona.
It turns out that each one had a message for me as it pertained to my dilemma. This seemed to happen as if by magic. And as the piece evolved, solutions began to appear and my way forward was made clear.
Let me give you an example. One character wanted to be a forest dweller (the green one, don't you know) and he reminded me that I had not visited the woods for some time. I took his advice and on so doing, much of my angst dissolved as I was baited by all the greenery around me.
The water man reminded me to visit the river & just go with the flow. Each character had a prescription and collectively I was rejuvenated.
Posted by Gerard at 07:06

And what did the red man remind you? Or is it that you ARE the red man? Going to write about each piece on your blog?

Love this Gerald.... usually when the colour blue pulls our attention it means that some quiet time is needed...which for you was the woods....
Thanks for the invite. I shall enjoy following this blog. Online inspiration. :)

Many thanks for the comments guys.

Elspeth- the red guy was the fire element which represented get up and get male energy, which still needed to be part of the equation. These characters were energies and so they are all part of me and all of us as well.

Great piece. At first i wasnt sure what to make of it. but the more i stared into the heart of the painting i realised you painted about life. the different people (red and blue, etc) represents the various personalities and experiences which like gears work together to form a whole. I dont know if people notice there is a person that has the same colour as the gear on the top right hand side. interesting choice of colours and different form it took. why did you change its forms does it mean something more or it jus show the mood you were in when u painted.

I need to see this in person!
Hasn't this been an amazing year for artists my friend? The energy is high. Love this. Hoping to sculpt by Bunty over summer will let you know when...and of course Chris and I are loooong overdue to visit your neck of the woods.
shar

love how this piece flows