Here's a clip of Splinter, as interpreted by word, sound & spirit. As you may see by now, the Splinter theme is far reaching. I threw out the idea of having a theme song to my comrade Ravi Maharaj (electronic artist : a_phake)

Click the play button in the middle of the picture

the lyrics came via 2 very creative sessions. It was chiseled out by both parties over e-mail. Ravi put the music down & had specific melodic ideas for the words & how they would be phrased. So while i took the liberty of spilling many quatrains of thought onto paper, ideas would eventually get tossed back and forth or out altogether. This process allowed the message of the song to be rounded off & polised. An experience not too unlike the physical process of sculpting.


IM EITHER GONNA RISE
OR GO DOWN WITH YOU


IM EITHER GONNA RISE
OR GO DOWN WITH YOU

The song will debut tonight on 95.1 FM @ around 10pm. Tune in & show your support.
It will also be part of a Soundtrack CD Souvenir, available on the Opening Night & for the duration of the exhibition. 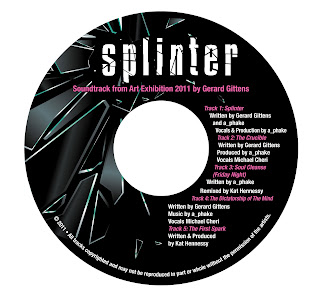 Hi Gerard, only listed to the first sony, but it sounds great. Wish all the best.

The lyrics soung like a heavy metal song, will tune in tonight!1

wow! luv it keep up the good work.